So no sooner do I have a problem with the zipper on my top (well, the car's top) than I have another:

What happened and I procrastinated about: Most of the time the car would start normally, but occasionally it would give me trouble. It would click once with the turn of the key. Sometimes hitting it quickly two times would make it start normally. More commonly I’d move the shifter into different gears, clutch out, and then start it with the clutch depressed and it would start normally. And by normally, I mean normal starter cranking speed and engine starting.

Condition of battery: New this summer. I had left the door ajar which left the interior lights on, which ran down the battery. I was able to get it recharged the first time. The second time it would take but wouldn’t hold a charge, so I replaced it.

What it’s doing now: I’m getting the single click (not the ratcheting sound of a low battery), but none of the usual shifter wiggling or double key turn works. However, the interior lights are normal brightness and don’t dim when I’m trying to start the car. Sometimes it will slowly turn the engine over but the starter will make a grinding sound (rather than the usual starter sound).

And yes, I can't get the top fixed until I can start the car!  😜 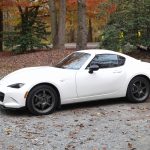 Sine hitting it quickly two times did something, I would start looking at the steering column lock cylinder.

I can’t think of any other place for a trouble spot to be if turning the key did the trick in the past.

Thanks for all the ideas. I have several other suggestions but I need a place to have a mechanic/technician sho can respond on those. I've gone as far as Ray Price Mazda wants to work on the old car, so I'd like to find someone in the general area who might be able to exorcise these demons. Anyone have a suggestion as to who might be knowledgeable in the NA so he (or she) is not starting from scratch? 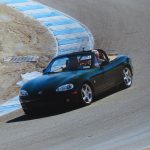 A little late to the dance on this one. My 2001 had lights, dingers, etc all working fine. Battery fully charged. Turned the ignition key and nothing. Took a chance and replaced the ignition relay. $4.95. Zoom-zoom success! (This just happened a couple of days ago. Must be going around.)

@bergy I wish I had nothing. It's that crazy grunt that can be fixed...until it can't...by shaking the shifter. It's nuts.

maybe something with the neutral safety switch?

Oopsie! Just tried to start. All systems go, lights, dingers, etc., but nothing on key turn. Back to square one....

After a month undercover and under snow, I was able to get at Bergy today and put in a new battery. Started right up. Good boy!

Uh, was it you or Bergy that spent a month under cover and under snow, Tom? 🤔

LOL! All of the above!