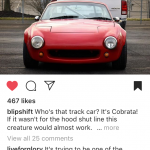 Spot on. Kiernan and I will bring the Pitcrew for another round.

If you'd like, I can cover dues for this year and next.

Very excited to spend more time with the community.

Evan, we moved you from "wait-listed" to "attending", since the two remaining openings have not been filled by paid members.

We hope to see you tomorrow!

Walter, thanks for another great day!  Sunny weather, nice roads and ICE CREAM!  I was very impressed by the way you navigated all of us thru downtown Wilkes-Barre, not once, but twice! 👍  And, the opportunity to take a run up the Giant's Despair Hillclimb route is always a nice addition (well, the first time was nice... the second time up the hill, behind that pitiful Honda Civic that could barely top 5 mph, was rather less of a thrill 😕).

We welcomed a new couple, Xavier and Heydi (got it right, now!), in a nice 2019 ND RF.  Also, it was nice to see Evan and his son, Kiernan, again, for their second event with us.  Today was Kiernan's birthday, and I hope he enjoyed his ice cream and his visit to Hillside Farms.

In all, a lovely day!  Thanks, again, to Walter (and to Nancy, his patient co-pilot) and also to Corrina, for running tail and making sure any stragglers were herded along.

Thanks Walter for a fun day of driving and ice cream!  What could be better than that?  Looking forward to next Saturday's drive. 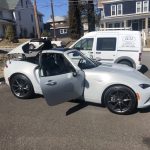 Thank you everyone for making  Heydi and I feel so welcomed today, we truly enjoyed our time can’t wait for the next ride

We're glad you and Heydi (OK, I stand corrected on her name... sorry about that) enjoyed this drive, Xavier!  Again, we welcome you as new members of LVMOC, and we hope to see you at more of our events! 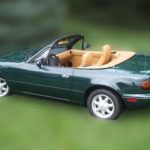 Yes, Xavier, it was nice seeing your Ceramic White pulling into the Sheetz Station yesterday morning. So happy you and Heydi were able to join us and that you both enjoyed yourselves. We'll see you on future drives.

Thank you again Walter for another great drive to get some tasty ice cream!

Love that ceramic Xavier!  It is one of my two favorite colors for the ND, the other being polymetal grey