Looks like I have the first tech help request on the new forum. I managed to blow the main 80A fuse in the underhood fuse box when jumping my '90 after not closing the door completely. I've never had that happen on any car, but I guess having the footwell lights on had something to do with it...or, I'm not sure.

Any, I have to replace the fuse, and that requires removing two 10mm bolts in the fusebox. I did that, put the new fuse in and bolted it down. That's where the mystery begins.

There's a wire with a regular 5A fuse in it that sort of blocks access to the bolt on one side, and in getting to the bolt, I managed to pull the wire lose...without seeing where it was connected. And now, despite being relatively intelligent, I cannot find where it was plugged in.

I've searched the internet and not found anything. The Mazda parts illustration only has a line drawing of the wrong side of the fuse box. The fuse box lid which shows where all the fuses are doesn't show the wire removed link No where can I find anything.

Is anyone familiar with the the fuse box and that silly little wire? 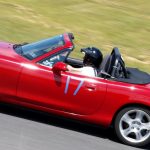 What color is that wire? I have a wiring diagram I could share with you if that would help.

The wire is brown. The more I look at this, I think is a fuse for the aftermarket alarm system that was installed on the car when I bought it. I've removed the alarm's underhood horn, and there's a button on the dash below the steering wheel of undetermined function. No doubt somewhere there's some sort of box that detects whatever the alarm is supposed to detect.

The fuse itself is in some sort of inline holder (blue) that looks like it's clamped over the wire with the fuse stuck out to the size. On the fuse holder is lettering reading "20A max." So...generic. Mazda would wouldn't use just any old fuse holder.

I think I can safely ignore this wire removed link

(The only problem is that I when I took my battery to be tested, they told me--after first thinking it must be something from a lawn tractor--that they were able to charge it and it tested OK. I took it home, put it in the car, and then was not able to drive it because other plans beckoned. A day later when I was albe to get back to it...the battery was beyond dead. So now I'm going to borrow a charger from a friend and see whether I can get this battery to work. I suspect that it's dead. It wasn't new when I bought the car almost five years ago so I expect its past its nine lives. Now that we're past the holidays I'll be able to get back to it).

There are no upcoming events at this time.